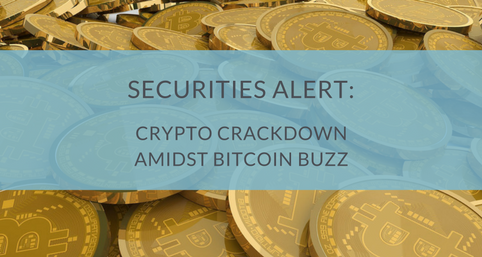 Bernie Madoffs of blockchain, beware: The newly-formed Cyber Unit of the Securities and Exchange Commission (SEC) filed its first enforcement action related to an alleged Initial Coin Offering (ICO) fraud on December 1st. The SEC’s complaint,1 filed in federal court in the Eastern District of New York, set forth charges against unincorporated startup PlexCorps and its two top officials, Dominic Lacroix and Sabrina Paradis-Royer, for multiple violations of the U.S. securities laws related to PlexCorps’s sale of unregistered tokenized securities, known as “PlexCoins.”

More specifically, the SEC’s complaint charges Lacroix, Paradis-Royer and PlexCorps with violating the anti-fraud provisions and Lacroix and PlexCorps with violating the registration provision of the U.S. federal securities laws. The SEC, in alleging that the defendants materially misrepresented PlexCoins’ future value, cited PlexCorps’ advertising materials that promised investors that the PlexCoins would be worth 13 times their initial investment in less than a month. Despite the too-good-to-be-true promises included in their advertising materials, PlexCorps raised up to $15 million for PlexCoins from thousands of investors since August.

Shortly following the SEC’s filing on December 1st, the District Court issued an emergency court order to freeze the assets of Lacroix, Paradis-Royer and PlexCorps. The SEC’s complaint against PlexCorps demonstrates that, in certain circumstances, crypto-tokens should be considered securities.2 We have analyzed this issue on behalf of several clients and our determination is always specific to the facts and circumstances of the proposed business model. We urge individuals and companies interested in creating and selling blockchain tokens to consult counsel to determine whether their tokens are securities, such that they must be registered with the SEC.

Despite the seemingly boundless Bitcoin buzz, individuals interested in creating or investing in blockchain tokens should bear the following points in mind in light of the pending PlexCorps case:

• The PlexCorps complaint involves allegations of (i) securities fraud by means of exorbitant promises and (ii) registration violations. To avoid similar charges, legitimate entrepreneurs should work with counsel to draft tempered descriptions of their business prospects and appropriate risk disclosures.

• The SEC’s inclusion of registration violation charges in the PlexCorps case should put other blockchain startups and promoters on notice that tokenized securities may have to be registered with the SEC. Although we expect that “first generation” enforcement actions by the SEC and other regulators will allege fraud, the inclusion of registration violations is not just an “add-on.” Rather, we expect that at some point soon, the SEC will bring “stand-alone” registration cases to emphasize that in certain circumstances, crypto-tokens are securities that require registration.

The contents of this Securities Enforcement Alert are general in nature, for informational purposes only and do not constitute legal advice.