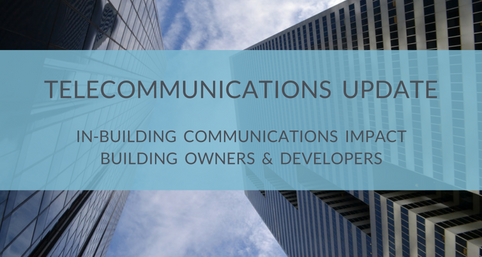 Office building, hotel, apartment building and facility owners and developers are facing increasing pressure to provide in-building wireless access for their tenants and guests. In addition, many building codes now require in-building wireless access by our nation’s first responders. These systems, often called Distributed Antenna Systems (DAS), are becoming more important on a daily basis, and they are a major element in the so-called 5th Generation (5G) buildout by wireless carriers.

This represents an opportunity (as well as a responsibility) which can often be monetized by the sophisticated building owner or developer. Planning in the development stage, as well as savvy negotiations with wireless developers and carriers, can result in increased revenue for the building and a terrific differentiator in a competitive market. A recent report from Radius Global showed that 77% of respondents said that a building’s quality of mobile network coverage was a major determinant in executing a lease.

Shulman Rogers attorneys are skilled negotiators in the wireless area, including DAS agreements. Contact us for advice in the planning stage of your building, as well as before you enter into any agreement with a wireless developer or carrier.

The contents of this Alert are general in nature, for informational purposes only, and do not constitute legal advice.